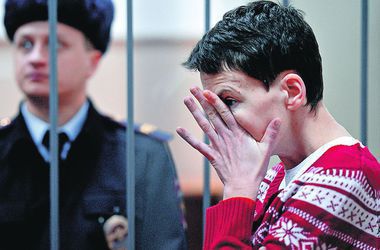 The Russian court has ordered to extend MP Nadiya Savchenko's detention till September 30, MP Ivan Kurlko posted on Twitter from the courtroom.

According to his report, "the Investigative Committee of the Russian Federation has filed a new petition for an extension of her detention for three more months. The previous term expires on June 30, so the investigators decided to extend it in advance," Savchenko’s lawyer told journalists.

"They are repeating the same thing they have already said five times. The only difference is that the case has to be transferred to a higher court, since the arrest is extended for a period of over a year, in which case it might be Moscow City Court," he said.

Savchenko’s sister Vera and an MP from the Batkyvshchyna Party, Ivan Kurlko were in the courtroom to give their support to Nadia.

“Ukraine is at a critical moment in its history. As Russia continues its unprecedented aggression in the region, the United States should to be doing more to ensure Ukraine can defend its borders,” Durbin said. “At today’s meeting, Prime Minister Yatsenyuk made it clear that increased military aid, defensive weapons, and economic support will help Ukraine in its struggle for freedom and sovereignty. The United States must act swiftly to provide this assistance and the Senate Ukraine Caucus stands ready to help.”

Over 20 attacks on army positions in the ATO area

The largest number of strikes was recorded in the Artemivsk direction before midnight.

The settlement of Kurdyumovka was assaulted by outlaws twice with heavy 152-mm artillery assets.

Army positions near Kirovo, Zolote, and Nelepovka were attacked with mortars, grenade launchers, and machine-guns.

Also, rebels fired 122- and 152-mm artillery systems on Shyrokine late in the evening.

Positions of Ukrainian troops near Vodyane were shelled with 122-mm artillery.

Russian mercenaries intensified their activity near Lugansk after midnight.

Maryinka was repeatedly assaulted with 120-mm mortars overnight. In the Artemivsk direction, rebels shelled army positions near Popasna, Stepne, and Novozvanivka with the same weapons.

Terrorists fired grenade launchers and machine-guns on Shyrokine early in the morning.

The enemy continues to conduct air reconnaissance. Over 10 drones were seen over the ATO area in the past 24 hours.

Rebels carried out an attack on the village of Tryokhizbenka, Novoaydarsk district, on the night of June 10 with 152-mm howitzers, as well as mortars, the head of the Lugansk Regional State Administration, Gennady Moskal, reported on his website.

The attack was launched at 2 AM from the side of rebel-held Slovyanoserbsk, situated on the right bank of the Siversky Donets.

Shells hit two residential houses and caused a lot of damage. Moreover, another shell went off in a vegetable patch near a nursery.

According to preliminary data, none of the peaceful residents was wounded or killed, and information on casualties among servicemen is being ascertained.

As reported earlier, it is forbidden by the Minsk agreement to fire larger than 100-mm artillery in Donbass.

Militants have shelled Stanyzia Luganska; a gas pipeline has been damaged as a result,

Chairman of the Lugansk Regional State Administration Gennady Moskal reported on his webpage on Wednesday.

According to him, Stanyzia Luganska was fiercely attacked with mortars, AA mounts and machine-guns in the period between 9PM and 1AM.

A gas pipeline in Barbashov Street was damaged as a result of shelling.

General Staff: 7 service members were wounded in the ATO area in the past 24 hours

7 Ukrainian service members were killed in the ATO area in the past 24 hours, a spokesman for the Ukrainian National Security and Defence Council, Andriy Lysenko, reported at a briefing on Wednesday.

According to him, our border guards and army units recorded 30 UAVs over the conflict zone on Tuesday.

The last crossing point to the rebel held territory of the Lugansk region has been blocked by PRL rebels, Chairman of the Lugansk Regional State Administration Gennady Moskal reported on his webpage on Wednesday.

According to him, several plates with inscriptions saying "Bridge is mine-strewn" and "No traffic" were fixed before the bridge leading to the settlement of Rodyna on June 9 in the rebel held territory. Armed gunmen allow neither pedestrians, nor cyclists, nor motor vehicles to cross into the government-held territory of Ukraine.

"In connection with this, the Military and Civil Administration has urged everyone, who has passes and a wish to get to the rebel-held territory of the region to opt for the route Artemivsk-Gorlivka through the checkpoint "Mykolayivka.