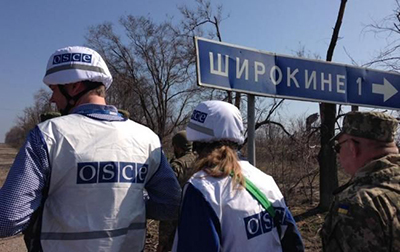 PRD and PRL rebels have come out of Shyrokine, for they received orders from Moscow to take real steps toward disarmament ahead of a new round of Minsk negotiations, Director of the Social and Humanitarian Policy Department of the Ministry of Defence Valentyn Fedichev told Channel 5, as reported by "Ukrinform".

"Rebels have taken the initiative to withdraw gunmen from Shyrokine - and this has happened indeed - ahead of a new round of Minsk talks; now they are 5 km away from Shyrokine," he informed.

At the same time, Fedichev expressed an opinion that Russia had adjusted tools aimed at taking Ukraine under control. According to him, Russia set a goal and now wants Ukraine to settle the conflict on terrorists' terms, and to reconnect with the so-called PRL and PRD.

Teenager wounded during a rebel attack

A 16-year-old man, resident of the village of Nyzhnye Vilkhove, got wounded at about 1PM, July 6, in the Stanyzia Luganska district, the press-service of the Ministry of Internal Affairs said in a statement on Tuesday.

According to investigators, at that moment the young man was passing by a bridge located in Stanyzia Luganska at the demarcation line between Ukraine and the rebel-held territory.

According to the preliminary information, the teenager was shot by a sniper.

The OSCE observer mission reported a decrease in the number of attacks around the Donetsk airport in comparison with previous days, the OSCE report of July 5 reads.

The SMM observed a lower number of ceasefire violations at and around the Donetsk airport on 5 July, as compared to previous days. At the Joint Centre for Control and Co-ordination (JCCC) observation point at Donetsk central railway station (“Donetsk People’s Republic” (“DPR”)-controlled, 8km north-west of Donetsk city centre), on 4 July, the SMM heard, and in some cases saw, a total of 124 explosions, as compared to 27 explosions on 5 July. On 4 July, in the SMM’s presence, the JCCC representatives at the observation point at Donetsk railway station negotiated a ceasefire, which lasted for 40 minutes. In the area of Berdyanske (government-controlled, 1.5km west of Shyrokine, 18.5km east of Mariupol) and Sopyne (government-controlled, 16km east of Mariupol) the SMM observed movement of military trucks and vehicles; however, three male and two female residents told the SMM that there had been no shelling.

after a lull in the fighting, and fire banned weapons

Rebels noticeably intensified their activity along the whole demarcation line in the period between 6PM and midnight, July 6, after a period of a relative lull in fighting, the ATO press-centre posted on Facebook.

Insurgents carried out  26 attacks on positions of ATO forces over the above mentioned period, 4 of which with 120-mm mortars banned by the Minsk agreement.

Namely, rebels fired shells on ATO positions near Troitske for half an hour beginning from 8.20PM. Another attack was launched near Pisky, and lasted for 40 minutes.

Gunmen also attacked Ukrainian troops near Schastya, Lugansk region, and near Novotroitske in the Mariupol direction.

In total, 7 UAVs were observed spying in the Lugansk and Mariupol regions.

Rebels shelled positions of ATO forces near Novogorodske and Pavlopil on the night of July 7 with 120-mm mortars. Furthermore, Pavlopil was bombarded with tanks.

Rebels fired machine-guns in the direction of Maryinka, Luganske, and Opytne.

Gunmen cut into rear in Schastya and Stanyzia, and carry out attack to the north of Shyrokine

Rebels continue to fire on army positions and government-held residential areas in an attempt to provoke Ukrainian forces to respond with heavy armaments, the founder of the Information Resistance Group, Dmytro Tymchuk, posted on Facebook on the morning of June 7.

Ukrainian informants observed activities of two rebel armoured units to the west of Donetsk, in the Avdiivka-Maryinka-Pershotravneva sector, which provided accurate fire on army positions from their previously equipped positions.

Moreover, insurgents centred fire not only on objects, situated at the battlefront, but also in the rear of ATO forces committing 122- and 152-mm artillery. They additionally fired 82- and 120-mm mortars on this sector.

Terrorists attacked Ukrainian troops deployed to the south of Donetsk near Starognativka and to the north of Granitne with AHS-17, SPH-9 and 82-mm mortars.

Separatists stationed near Telmanove and Dokuchayevsk have been reinforced and received new equipment, the founder of the Information Resistance Group, Dmytro Tymchuk, posted on Facebook on the morning of July 7.

"Several Russian and terrorist units were relocated to Telmanove and Dokuchayevsk, in order to reinforce rebel groups previously deployed to this area, he writes.

"In total, several APC-70s and ICV-2s and around 100 personnel were relocated,” Tymchuk reports.

Schastya TEC shelled at night, no water supplies reported in the town in the morning

The territory of the Lugansk thermal power plant situated in the town of Schastya was shelled on the night of July 7 from terrorists' positions in the rebel-held village of Vesela Gora.

According to reports of the Lugansk region governor, two shells hit the switchyard and another one the turbine department of the plant.

Electricity supply was not interrupted, but there was no water in the town until this morning.

It has been the second in a row attack on the TEC, which provides electricity to the government-held part of the region. Rebels also shelled the plant on Sunday evening and damaged equipment, Moskal reminded.

Rebels have fired mortars and grenade launchers on Krymske, Lugansk region; two Ukrainian fighters have been wounded as a result, Chairman of the Lugansk Regional State Administration Gennady Moskal reported on his webpage on Tuesday.

According to him, a clash between Ukrainian troops and rebels, who had fortified their positions in the neighbouring town of Sokolnyky, occurred at around 6 PM Monday on the outskirts of Krymske.

Russia has intensified its air observation on the border between the Kherson region and the temporarily occupied Crimea, a spokesman for the Ukrainian National Security and Defence Council, Andriy Lysenko, reported at a briefing on Tuesday.

8 enemy UAVs were observed in the area bordering with the temporarily occupied peninsula, Lysenko said.

No losses were reported in the area of the anti-terrorist operation in the past 24 hours, but 3 soldiers sustained different types of wounds, a spokesman for the Ukrainian National Security  and Defence Council, Andriy Lysenko, reported at a briefing on Tuesday.