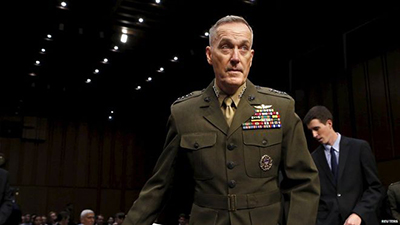 US General calls Russia "the top threat" to America

A general in line for the highest US military post says Russia poses the greatest threat to national security.

During his confirmation hearing to become chairman of the Joint Chiefs of Staff, Marine Gen Joseph Dunford called Russia's recent actions "nothing short of alarming".

Relations between the US and Russia have deteriorated since Russia annexed Ukraine's Crimea region last year.

A pro-Russian insurgency in eastern Ukraine has also prompted US sanctions.

"So if you want to talk about a nation that could pose an existential threat to the United States, I'd have to point to Russia." Gen Dunford told senators on Thursday.

Some US lawmakers have pushed for the military to provide lethal weapons to Ukraine's government, a move Gen Dunford called "reasonable".

"Frankly, without that kind of support, they are not going to be able to defend themselves against Russian aggression," Gen Dunford said.

Thus far the US has only provided non-lethal equipment and training for Ukrainian forces.

More than 6,000 people have been killed in fighting in Ukraine, which began in April 2014, between government forces and pro-Russian rebels in the eastern Donetsk and Luhansk regions.

Russia denies arming the rebels or sending troops there.

Donbas rebels carried out around 40 attacks on army positions along the whole demarcation line, including those with weapons banned by the Minsk agreement, the ATO press-centre reports.

Positions of Ukrainian military near the village of Taramchuk were assaulted twice with 122-mm artillery.

Moreover, rebels fired 152-mm artillery on the village of Granitne, Mariupol direction, in the period between 7.45 and 8PM.

Insurgents launched an attack on government forces near Pisky with 120-mm mortars and machine-guns at midnight, July 10.

10 enemy UAVs were spotted over the Lugansk region in the period from 9.25 till 11PM Thursday. Another one was seen in the Mariupol direction. Additionally, the press centre reported about 3 rebel drones downed in the Lugansk region by divisions of the anti-aircraft defence of Ukraine.

Moskal: An ATO soldier dies in a battle with rebel commandos near Stanyzia Luganska

A servicemen has died and another one been wounded as a result of a clash with rebel commandos, which occurred near Stanyzia Luganska, Chairman of  the Lugansk Regional State Administration Gennady Moskal reported on his webpage on Friday.

According to him, a skirmish between government forces and a rebel sabotage and reconnaissance group, which had infiltrated into the government-held territory of Ukraine, occurred at about 5PM in the village of Malynove, Stanyzia Luganska district.

A serviceman died in the battle and another one was wounded and now is treated in a hospital.

Apart from Stanyzia Luganska, further clashes were recorded in Novotoshkivka, on the Bakhmutka highway near the 29th roadblock, and in Krymske. No reports about casualties and damages were received from the mentioned flash points.

President Petro Poroshenko has announced a considerable increase in terrorism threat levels in the regions of Ukraine.

He said during an extended meeting of the MIA collegium in Kyiv on Friday, as reported by Interfax-Ukraine.

The level of sabotage and terrorist threats in Ukraine outside the Anti-Terrorist Operation (ATO) zone has increased significantly, Ukrainian President Petro Poroshenko said at a board meeting of the Interior Ministry on Friday, according to an UNIAN correspondent.

"The present situation with crime is primarily caused by illegal actions of terrorist units in the Donetsk and Lugansk regions, as well as by illicit trafficking of weapons, explosives, ammunition," he said.

According to Poroshenko, the criminals relish the opportunity, when most of the resources of law enforcement officers are focused on putting down various manifestations and dealing with consequences of the Russian hybrid war against Ukraine."

"Today, exchange of captives is due to take place in accordance with the format "10 for 10", the advisor responsible for releasing hostages reported.

Budyk also added that a simultaneous exchange of all hostages is impossible at present due to the lack of a rebel decision-making centre, which would deal with this issue.

2 Ukrainian military died, and 10 others were wounded in the area of the anti-terrorist operation in the past 24 hours, a spokesman for the Ukrainian National Security and Defence Council, Andriy Lysenko, reported at a briefing on Friday.

According to him, the last day was marked with intense hostilities, as rebels increased the number of shell strikes and sabotage and intelligence operations.