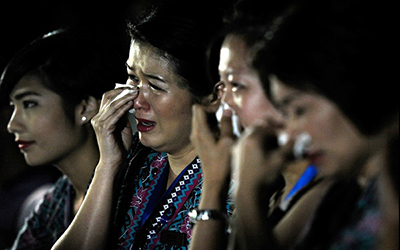 The countries undertaking the independent criminal investigation into the downing of Malaysia Airlines flight MH17 have asked the UN Security Council to establish an international criminal tribunal to try those responsible for crimes connected to the downing that occurred over Ukraine on 17 July 2014 and took 298 lives.

Australia, Belgium, Malaysia, the Netherlands and Ukraine consider an independent international criminal tribunal established by the Council, reflecting the highest international standards, would be the best means of ensuring justice for the victims and their loved ones. It would also be an appropriate response to the fact that the incident and the related implications for the safety of civil aviation affect the interests of the international community as a whole. The five countries are working to secure the support of Security Council Members for the tribunal.

In the immediate aftermath of the MH17 disaster, the Security Council adopted Resolution 2166, which demanded that those responsible for the incident be held to account and that all States cooperate fully with efforts to establish accountability.

Australia, Belgium, Malaysia, the Netherlands and Ukraine call upon members of the Security Council to support this proposal to ensure that those responsible are held to account and to deter those who would threaten civil aviation.

President Obama and Vice President Biden expressed support for Ukraine's sovereignty, and territorial integrity, including their commitment to maintain sanctions on Russia until it fully implements its obligations under the Minsk agreements. The U.S. president also commended the Ukrainian Government for the steps it has taken to implement its obligations under the Minsk agreements, including the submission to Ukraine's parliament of draft constitutional amendments on decentralization. They praised Prime Minister Yatsenyuk for resisting populist measures that could undermine Ukraine's financial stability whilst pressing Ukraine passing additional reform measures, to fulfil its commitments to the IMF and other international financial institutions that have given their support to the government in Kiev.

Russian and terrorist forces carried out over 80 attacks on positions of ATO forces and residential areas, 5 of which with 152- and 122-mm artillery and 32 others with 120-mm mortars, as well as tanks and MLRSs, the ATO press centre reports.

A relative lull in fighting was reported in the Lugansk and Mariupol directions. Gunmen fired on army positions near the village of Krymske and a rebel sniper troubled our soldiers in Shyrokine.

Moreover, the enemy carried out constant air observation. 12 rebel UAVs were reported spying over the ATO area, 2 of which were downed by divisions of the Anti-Aircraft Defence of Ukraine.

Invaders carried out two attacks on our positions near the settlement of Pisky with tanks at midnight, and a sniper was reported firing in Shyrokine.

Shyrokine still under attack despite all the words about demilitarizing

Positions of Ukrainian law enforcement units are still under attack in the village of Shyrokine, a press officer of the M sector, Yaroslav Chepurny, told 0629.

PRD formations fired machine-guns and sniper rifles on army positions in Shyrokine at about 9 o'clock, July 13.

Sniper attacks were resumed in the evening at 5.45PM and lasted 12 minutes.

Another sniper shooting occurred in the period between 4.10 and 4.30AM, July 14.

No casualties among soldiers of the Armed Forces of Ukraine, or the National Guard were announced.

As reported earlier, one of the main conditions voiced by the Ukrainian part in regard of the demilitarization of Shyrokine was maintaining a complete ceasefire.

If militants seized the high point in the village of Shyrokine, it would be easier for them to shell Mariupol.

No losses were reported in the ATO area in the past 24 hours. However, 5 soldiers sustained wounds, a spokesman for the Presidential Administration on ATO issues, Andriy Lysenko, reported at a briefing.

According to him, the situation in the ATO has a tendency to get worse.

12 rebel UAVs were reported spying over the ATO area.

"Another drone of the hostile country was observed in the Zaporizhia region," the Colonel said.