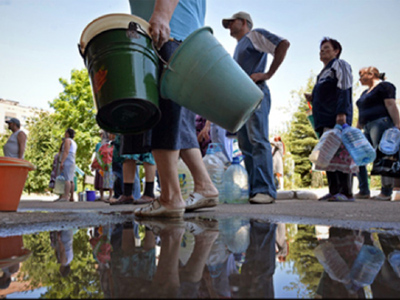 Up to 1.3 million people in war-torn eastern Ukraine are facing acute water shortages and a serious water crisis due to damaged or destroyed infrastructure, the United Nations children's agency UNICEF said on Tuesday.

Many in the Luhansk region have to rely on water trucks or travel to neighbouring villages to get water. In Mariupol, a city of 500,000 in the Donetsk region, they rely on water from a "rapidly depleting" reservoir, UNICEF said.

"Water is one of the most acute needs of children and adults in eastern Ukraine," Giovanna Barberis, UNICEF representative to Ukraine, said in a statement.

"No children and families should have to risk their lives in order to access one of life's basic necessities for survival."

With little rain and high temperatures, conditions are becoming increasingly difficult. The risk of waterborne diseases is also rising as people are unable to store and transport water safely, UNICEF said.

UNICEF said more humanitarian partners are needed for the emergency water and sanitation response. The agency and its partners have been supplying water to some 550,000 residents in the region since January.

with 100 rebel attacks recorded over the past 24 hours

The situation in the ATO area is escalating, as rebels breached the ceasefire more than 100 times over the past 24 hours, the ATO press-centre posted on Facebook.

In the Mariupol direction, machine-gun shots were heard near the villages of Talakivka and Mykolayivka.

As of 6AM, July 15, rebel attacks on Ukrainian troops with 122-mm howitzers and 120-mm mortars were recorded near the settlements of Avdiyivka, Opytne, and Starognativka.

Tymchuk: There is a tendency to escalation in Donbass

The situation in the ATO area is escalating with a tendency to develop into an armed confrontation, the Information Resistance Group stated.

The intensity of rebel shelling is growing, the coordinator of the IRG, Dmytro Tymchuk wrote on the morning of July 15 on Facebook.

Insurgents carried out numerous attacks with 152- and 122-mm artillery, as well as 82- and 120-mm mortars on positions and strongholds of ATO forces along the line Pisky-Opytne-Vodyane-Avdiyivka. Several fire attacks were conducted directly on Avdiyivka and Vodyane.

A group of special operations forces of the Chief Intelligence Directorate of the RF General Staff comprised of 200 to 250 soldiers has arrived in Lugansk, the founder of the Information Resistance Group, Dmytro Tymchuk, posted on Facebook on the morning of July 15.

“The group was divided in cohorts and immediately deployed to several Lugansk areas," he writes.

"Some rebel reinforcements (in total over 500 people) arrived in the Petrovsky district of the Donetsk city on tented trucks and buses. They had not been trained, which was obvious due to their behaviour," Tymchuk wrote.

A battery of D-30 howitzers and a mortar element were relocated from Gorlivka to Vuglegirsk. Additionally, two multi-purpose light-armoured towing vehicles and two APC-70s were observed in the same convoy.

Fierce shelling results in 8 dead and 16 wounded in Donbass

One of the most intensive bombardments of the Ukrainian territory, since the Minsk agreement was inked, occurred in the past 24 hours, the press centre of the National Security and Defence Council of Ukraine announced.

8 Ukrainian soldiers were killed, and 16 others wounded as result.

5 Ukrainian military were blown up and died near the village of Bolotne, Stanyzia Luganska district, according to a report released earlier today by the police press centre in the Lugansk region.

National Security and Defence Council: Russia is planning attacks on Donbass in at least 3 areas

The Security and Defence Council of Ukraine has announced that Russia plans to go on the offensive in at least three important Donbass directions along the confrontation line.

"The General Staff of the Armed Forces of Ukraine is working on effective measures against the Russian aggression. The Operation Headquarters was established with the participation of chiefs of national law-enforcement units to counter any provocations conducted by the Kremlin secret service," the NSDC reports.

CNN: The Netherlands prove that MH17 was downed by pro-Russian rebels

It's been nearly one year since 298 people were killed after a commercial passenger plane broke up over the Ukraine.

U.S. officials concluded Malaysia Airlines flight MH17 was struck by a missile and shot out of the sky. A final report from investigators has yet to be released but CNN has learned new details from the draft investigative report for the July 17, 2014 incident.

Dutch accident investigators say that evidence points to pro-Russian rebels as being responsible for shooting down MH-17, according to a source who has seen the report.

The Malaysian Airlines flight went down in the Donetsk area of Ukraine. According to two sources with knowledge of the investigation, a draft of an investigative report authored by the Dutch Safety Board, the lead agency in the investigation has been distributed for review to numerous agencies around the world including the National Transportation Safety Board, Federal Aviation Administration and Boeing.

The draft investigative report is several hundred pages long. According to one source close to the investigation the draft report included the exact type of missile used to bring down MH17 and the trajectory of the missile.

Another source with knowledge of the report's details says it gives a minute by minute timeline of flight MH17. This source also says not only does the draft report pinpoint where the missile was fired from it identifies who was in control of the territory and pins the downing of MH17 on the pro-Russian rebels.

According to both sources, the report also pins some blame on Malaysia Airlines for how its planes were dispatched that day.

The final report is expected to be competed and published in the first half of October 2015.

Lysenko: Most difficult situation in the Donetsk direction

The situation in the ATO area is worsening, as rebels have intensified shelling in a number of areas, a press-secretary of the Presidential Administration on ATO issues, Colonel Andriy Lysenko, reported on Wednesday at a daily briefing.

The tensest situation is reported in the Donetsk direction with 80 per cent of breaches of the Minsk agreement conducted by rebels in this region.

Such areas as Svitlodarsk agglomeration, northern outskirts of Gorlovka, the village of Novogorodske and western outskirts of Donetsk remain the most troublesome areas in this sector of the confrontation line; moreover, local gunmen regularly fire heavy armaments here, namely artillery and tanks.

Lysenko also added that 5 rebel UAVs had been reported spying over the ATO area on Wednesday, July 14.