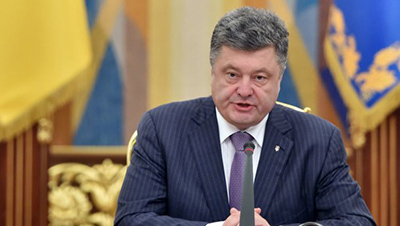 Poroshenko: No special status for Donbass

Ukrainian President Petro Poroshenko says draft amendments to the Ukrainian constitution concerning the decentralization of the national governance system that he has submitted to the Verkhovna Rada do not envision any “special status” of Donbass, and Ukraine will remain a unitary country.

"The bill doesn't have the slightest hint about federalization. Ukraine has been, is, and will be a unitary state. And the constitutional draft doesn't envision and cannot envision any special status for Donbas, there is simply no such thing there," Poroshenko said in presenting his constitutional amendments at a Verkhovna Rada hearing on July 16.

"It allows for “a specific procedure of local self-government in certain administrative units in the Donetsk and Luhansk regions”, which is to be regulated by a special law," he said.

Savchenko appeals to the leadership of the United Nations, the PACE

and the European Parliament for help

The Ukrainian birdwoman and MP, Nadiya Savchenko, who is detained at a predetention centre in Moscow, has made a plea to the UN Chief, the presidents of PACE and the European Parliament for help, according to her letter to Ban Ki-moon, Ann Brusser and Martin Schulz published by Savchenko's lawyer Mark Feigin.

She said that the Russian authority planned to hold court in the town of Donetsk, Rostov region.

Savchenko believes that the submission of her case to the jurisdiction of the Donetsk court in the Rostov region is wrong; this place was chosen to hold court for political purposes in order to mess up the normal work of legal defence and discourage the media from highlighting legal proceedings".

"I ask you to assertively move a motion of ensuring normal and safe conditions for court proceedings, in particular of transferring the cause to a court of justice in the city of Moscow, on the Russian authority," Savchenko said.

The village of Kodema, Donetsk region, has been bombarded with 152-mm rebel artillery resulting in casualties among civilians; in total, rebels have carried out app. 90 attacks on ATO forces, 33 of which with weapons banned by the Minsk agreements, the ATO press-centre reports.

Russian and terrorist forces deliberately and demonstratively fired on yet another peaceful settlement of Donbass. This time, the village of Kodema in the Artemivsk district of the Donetsk region was bombarded with 152-mm rebel artillery at 8.50PM. Casualties among the civilian population were reported.

Furthermore, thugs carried out 7 attacks on army positions with 152- and 122-mm artillery, 31 attacks with 120-mm mortars and 9 attacks with tanks.

Militants continued to increase the intensity of attacks on ATO forces and civilian targets and to conduct provocations at the demarcation line, the head of the Information Resistance Group, Dmytro Tymchuk, posted on Facebook on the morning of July 16.

"The number of rebel attacks with military hardware, 122- and 152-mm artillery systems, which  should have been withdrawn according to the Minsk agreements, has increased," he writes.

In the Donetsk direction, rebels fired 122- and 152-mm artillery and heavy armaments on Pisky, Opytne, and the southern outskirts of Avdiyivka.

Ukrainian strongholds and forward positions were bombarded by two rebel batteries from rebel positions situated near Yenakiyevo and Vuglegirsk with 152-mm artillery systems. Opytne and the southern outskirts of Avdiyivka were also hit.

Positions of government forces and resident quarters of the settlements of Leninske, Mayorske and Mykolayivka were shelled with 82-mm mortars.

In the Mariupol direction, insurgents fired machine-guns and grenade launchers near the settlements of Talakivka and Shyrokine.

and 11 others wounded in the Donetsk region

One person was killed and 11 others wounded (among which 10 soldiers and one civilian) in the ATO area in the Donetsk region on July 15, the Donetsk Regional State Administration reports.

Namely, a woman was wounded in the town of Maryinka. She was taken to a local hospital in Kurakhovo and operated.

that Ukraine should submit the Constitution to Putin's approval

The leadership of the Donetsk rebels wants Ukraine to agree draft amendments to the Constitution with Russia, the rebel periodical DAN reports with a reference to a PRD representative, Denys Pushilin.

"We will insist on the statement of special status and on special rights for Donbass in the body text of the Constitution of Ukraine. First of all, on an equality with the Kyiv authorities," he said.

However, the Kremlin refused to comment on President Poroshenko's proposal on amendments to the Constitution of the country regarding a special status of the PRD and PRL.

"We won’t comment on it, we need more information," the press secretary of the head of the Russian state, Dmitry Peskov, told journalists as reported by TASS.