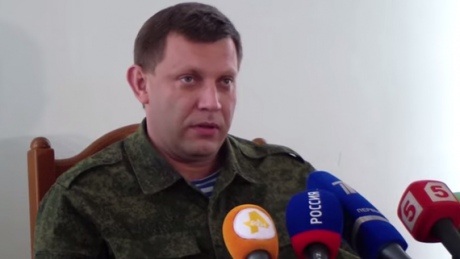 PRD rebel leader Alexander Zakharchenko considers the Minsk agreements as a tool for the complete seizure of the Donetsk and Lugansk regions, rebel websites report with a reference to his latest interview.

He also added that all breaches of the ceasefire by government forces would surely have to be punished.

"Any shot in the direction of our territory, our houses and our children will be fairly penalized. Penalizing means death for all those shooting at us," he noted.

As reported earlier, numerous attacks on Donetsk and Makiyivka have lately been conducted by rebels themselves.

ATO Headquarters: Militants lie about the withdrawal of weapons, and commit to action tanks

The situation in the eastern Ukraine remained stably tense on July 19, the press service of the ATO Headquarters reported on Facebook.

Ukrainian troops deployed to Maryinka were attacked most (over 20 times).

According to battalion Kyiv-1's reports on Facebook, the situation in the ATO area, particularly in Maryinka was especially tense.

As reported earlier, the city of Donetsk was shelled by rebels with self-propelled howitzers, which were later redeployed in the direction of Avdiivka and fired on AKKP. Moreover, rebels announced their intent to "raze Avdiyivka together with the plant (AKHP) to the ground".

8 civilians fell victims to the latest shelling, 4 of which died and 4 others were wounded. Three civilians were wounded in Maryinka in Monday’s mortar attack.

Positions of Ukrainian troops situated near Maryinka were assaulted around 30 times.

Makiyivka residents prove rebels guilty of attacks on their town

Rebels fired on the Chervonogvardiyskiy district of Makiyivka on Saturday, 62.ua reports on social networks with a reference to local residents.

A Makiyivka resident (born in 1980) was wounded during this attack, and is in hospital now (he lost part of the leg).

Locals argue that the assault was conducted with 82-mm mortars, and shell fragments prove such an assumption.

Moreover, representatives of the so-called militia were shocked, for Ukrainian troops would not have been able to hit the district with this type of weapons under any circumstances, taking into consideration its location, the website reports.

Europe’s dependence on imports of Russian gas will only grow, Russian Energy Minister Alexander Novak said in an interview with the Rossiiskaya Gazeta daily to be published on Monday.

The minister said it was once of the reasons why the issue of the construction of two more threads of the Nord Stream gas pipeline with a projected capacity of 55 billion cubic meters had become topical again.

Stanyzia Luganska was the most troublesome flash point in the Lugansk region in the past 24 hours with numerous rebel saturation attacks committing AHS-17s and SP artillery systems, the press service of the Lugansk Regional State Administration reported on Monday.

Three houses began burning as a result of shelling. One was burnt to ashes. The other one was damaged. A gas pipe line was hit and power lines were damaged badly. As of 9.20AM, there was neither gas nor energy in the village. No casualties were reported.

According to him, 5 servicemen were wounded in the Donetsk direction near the airport.

Rebels attack on a car with civilians; three people wounded as a result

Insurgents fired on a car near Kurakhovo, Donetsk region. Three civilians sustained wounds, the Ministry of Internal Affairs in the Donetsk region reported.