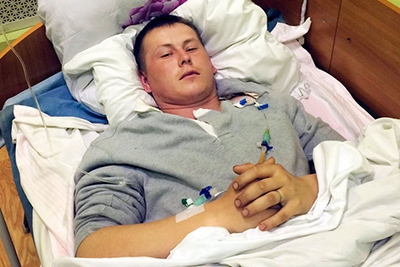 RF Defence Ministry officially refused to have anything to do

with CIA fighters captured in the Lugansk region

According to the reply of Russian Defence Ministry to a request of Human Rights NGO “Citizen. Army. Law” based in Moscow, the two officers used to serve in Russia, but arrived in Ukraine only after having been dismissed.

This is the first documented evidence of their actual status, which were received from Russian officials. According to Russian servicemen’s lawyers, the Ministry of Defence has not yet responded to any request made by the Ukrainian side.

The Defence Ministry also said in the reply that the arrested soldiers had served in the Russian army. However, "all the events connected with their departure from the Russian Federation and arrival in the territory of Ukraine occurred after their dismissal from military service..."

As reported earlier, two Russian CIA officers, namely Alexandr Aleksandrov and Yevgeny Yerofeyev, were captured by Ukrainian servicemen near the settlement of Schastya, Lugansk region, on May 16. They sustained wounds during fighting. A Ukrainian soldier, Vadym Puhachov, was killed in the battle.

During the interrogation, the detainees admitted that they served in the third special purpose brigade of the Main Intelligence Directorate of the Russian Armed Forces (military unit No. 21208 stationed in Tolyatti). The video of interrogation of two Russians, released by the Ukrainian part, showed them admitting that they had come to Ukraine with a 220-strong battalion by March 26, 2015.

Analyst: Mobilization in Transdniestria was announced on the instruction of Russia

The authority of the unrecognised Transdniestria-Moldavian Republic (TMR) has called men aged 18 to 27 years to the colours today, a decree of the TMR "President", Yevgeny Shevchuk, released on his official website, reads.

Another TMR decree says that men aged up to 30 years old, who graduated from state educational establishments and were subsequently transferred to the reserve and awarded a rank, are to be called up for military service, too.

According to a vice-rector of the Moldovan University of European Scholarship, Valeriu Cherba, it cannot be ruled out that the call to arms in the unrecognised Transdniestria had been agreed with the leadership of the Russian Federation.

A political analyst, Christian Tabere, called the decision of the unrecognised Transdniestria authorities a "bargain with the devil".

Rebels carried out around 80 mortar attacks on government troops over the past 24 hours, July 21, despite the recent agreement on the withdrawal of tanks and artillery systems, the ATO press centre reports.

The settlement of Opytne was fired upon by Russian terrorists with tanks and mortars.

Insurgents shelled army positions near the villages of Vodyane and Novgorodske with 120-mm mortars and tanks.

As of 6.00AM today, July 22, gunmen continued assaults on ATO forces near the settlements of Opytne, Pisky and Krasnogorivka. A rebel ICV fired on Ukrainian troops near the Donetsk airport at 3.16AM.

Another attack on army positions near the settlement of Berezove was launched at 5.10AM. According to reports, pro-Russian outlawed units of gunmen also fired on army positions 122-mm artillery and 120-mm mortars, which had been banned by the Minsk agreement.

The vast majority of the French MPs delegation that is planning to visit the annexed Crimea belongs to Sarkozy's Republicans party.

Eight out of 10 delegates will be coming from Les Républicains, a centre-right political party.

Former Secretary of State for Transport Thierry Mariani said that parliamentarians will first go directly to Russia, and only afterwards travel to the Crimea.

As reported, the French deputies plan to meet with the speaker of the State Duma Sergei Naryshkin in Moscow, and with local authorities and representatives of national minorities in Sevastopol and Yalta.

"Today it is necessary to maintain a dialogue with our Russian friends. A Russian-French meeting was supposed to be held earlier, but was canceled by Russia in response to sanctions against it. There has been no dialogue on the parliamentary level for almost two years now. This situation is sad and must be dealt with", said Mariani.

Earlier, Sarkozy criticized the current President Francois Hollande for not attending the Victory Parade in Moscow.

New KS-1 unmanned aerial vehicles have been tested in Petrivtsi near Kyiv, Minister of the Interior Arsen Avakov posted on Facebook.

"New KS-1 drones have been handed over to the National Guard," Avakov said.

The minister also added that each combat unit of the National Guard would receive Ukraine-made Furia drones as well as imported UAVs capable for aerial reconnaissance.

Rebels hit the dam when bombarding Troitske with heavy armaments

Insurgents attacked the village of Troitske, Popasna district, from their positions in the rebel-held village of Kalynove on Tuesday, the Lugansk Regional State Administration posted on Facebook.

They fired 150-mm artillery systems, which, according to rebels, had been pulled back from the demarcation line. “Several shells hit the Myronivka dam", the report reads.

According to expert's statements, if the dam had been ruined, it could have completely flooded the settlements of Myronivske, Donetsk region, and Troitske, Lugansk region.

In recent days, rebels have tended toward massing military personnel and building up equipment in key sectors of front lines, a spokesman for the Presidential Administration on ATO issues, Andriy Lysenko, reported at a briefing on Wednesday.

According to him, he meant first of all Vuglegirsk, the north part of Gorlivka, and western districts of Donetsk.

"In the Lugansk direction, the enemy carried out several armed provocations near Stanyzia Luganska, Stary Aidar, Zolote, and Troitske," he added.

The armistice was fully observed near other outposts of our defence in the Lugansk direction (in particular, on the Bakhmutka highway), the headquarters announced.

RSA: a woman killed and two other civilians wounded

in the Donetsk region in the past 24 hours

According to the Donetsk Regional State Administration, one woman died in the ATO area in the past 24 hours. In total, 9 people were wounded, including 7 servicemen and 2 civilians, namely two women from Yenakiyevo. One of them had to be treated in the trauma ward at the Artemivsk provincial hospital, and the other one received ambulatory patient care.

No losses were reported in the area of the anti-terrorist operation in the past 24 hours, but five soldiers sustained wounds in the Donetsk direction, a spokesman for the Presidential Administration on ATO issues, Andriy Lysenko, reported at a briefing on Wednesday.