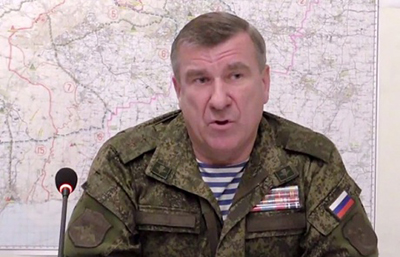 RF General Lentsov, who used to work with the OSCE and Ukrainians,

is a rebel leader now

Russian Colonel-General Aleksandr Lentsov, who previously was in charge of the Russian group at the Joint Centre for Control and Fire Coordination, coordinates rebels now, a spokesman for the General Staff, Vladislav Selezniov, told "Ukrainska Pravda".

"He was dismissed from the JCCFC office last spring and knows all positions of the Ukrainian Army, as he worked at the Joint Centre. And now, he unofficially stays as a "holiday-maker" on the other side," Selezniov reported.

Russia forming yet another "humanitarian convoy" for occupied Donbass

The Russian REM has begun to form the 35 convoy to deliver "humanitarian aid" to Donbass, the press service of Russian Emergency Ministry told TASS.

"Another - the 35th now - "humanitarian" column is formed in the territory of Donskoy Rescue Centre of the Russian REM situated in the Rostov region. Trucks from various parts of Russia will join a column of trucks from Noginsk," a statement reads.

The REM asserts that trucks will mainly deliver food, medicines, living essentials and other stuff needed to support life of the Donbass population.

The "humanitarian" column is expected to be dispatched in next couple of days.

It will be recalled that Kyiv insists that Russian aid has to be brought to Donbass by train.

Militants intensify attacks, and try to breach the defensive line of ATO forces

A record number of rebel attacks on Ukrainian positions for the past few weeks was recorded in the last 24 hours, the ATO press-centre posted on Facebook.

Militants fired mortars and machine-guns on a Ukrainian stronghold near Novgorodske close to Donetsk at 6PM yesterday. Moreover, gunmen carried out a number of attacks on Avdiyivka with 120-mm mortars in the evening and with tanks at midnight.

Insurgents committed 122-mm artillery when attacking Krasnogorivka in the period from 7PM till 1AM.

In the Artemivsk direction, rebels shelled Ukrainian positions in Troitske in the period between 9.40 and 10PM with Grad Multiple Launch Rocket Systems from their positions in the village of Kalynove.  This village was also mortared. ATO troops stationed in Rozsadky were shelled at 9.45PM with Grad MLRSs.

In the Lugansk direction, rebels carried out 4 attacks on the village of Krymske with mortars and artillery in the period between 11PM and 0.30 AM.

In the Mariupol direction, rebels fired artillery and mortars on ATO positions and residential quarters of Starognativka at midnight.

In total, the enemy violated the ceasefire agreement 127 times in the past 24 hours.

The villages of Opytne, Vodyane, and Pisky were shelled after midnight with mortars and artillery banned by the Minsk agreement.

Furthermore, around 400 gunmen backed by 122-mm artillery, tanks, and APCs, made an attempt to breach the defensive line; however, Ukrainian troops beat off the rebel assault.

A serviceman died and four others were wounded as a result of shelling carried out in the Lugansk region in the past 24 hours, the press service of the Lugansk Regional State Administration reported on Monday.

A colour sergeant of the 24 separate mechanised brigade got gravely wounded as a result of an evening attack on a Ukrainian roadblock in the village of Krymske from positions in the rebel-held village of Donetske.

Two other servicemen of the 24 brigade were wounded as a result of machine-gun attacks on the village of Novotoshkivka located near the 29 roadblock. The wounded men were taken to hospital, where they are currently treated.

Additionally, a woman was wounded as a rebel shell hit her yard.

NSDC report on casualties: one killed, ten wounded in the past 24 hours

The enemy is concentrating rebel forces with a view to break our defensive line; however, the General Staff  has worked out a plan to respond to provocative actions, NSDC Secretary Oleksandr Turchynov said in his comments on Monday.

According to him, one serviceman was killed and 16 others wounded as a result of the largest number of attacks carried out since the beginning of the year. A spokesman for the Presidential Administration on ATO issues, Andriy Lysenko, later added that one soldier was missing.

One service member of the Armed Forces of Ukraine dies near Starognativka. Fighting stops

As of 1.10PM, all battles near Starognativka have stopped.

One fighter of the Armed Forces of Ukraine was reported dead and 9 others wounded, as a result of fighting, Chief of the ATO Press-Centre Vladislav Selezniov told "Ukrainska Pravda".

"According to commanders stationed near Starognativka, tasks to repulse attacks were conducted by units of the Armed Forces of Ukraine," he added.

"There are no volunteering units deployed to this sector of the demarcation line," Selezniov added.