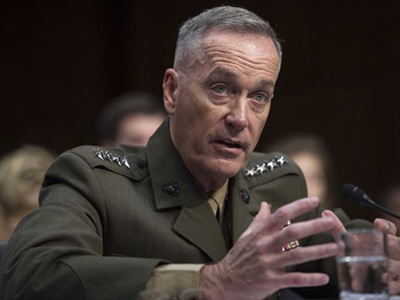 US Army General: Russia is the greatest threat

for the United States

The outgoing Army chief of staff said Wednesday that Russia posed the "most dangerous" threat facing the United States today, thanks to its "sophisticated" operations in Ukraine.

Gen. Raymond Odierno, who is leaving his post, estimated that only a third of U.S. brigades are capable of operating at the level of the hybrid warfare Russia is undertaking there. And he worries that Russia could next intervene in NATO allies like Latvia or Estonia.

"They are more mature than some other of our potential adversaries, and I think they have some stated intents that concern me in terms of how the Cold War ended," Odierno said of Russia when asked by CNN. "They have shown some significant capability in Ukraine to do operations that are fairly sophisticated, and so, for me, I think we should pay a lot of attention."

Odierno explained that he's concerned that Russia underestimates the extent to which NATO partners would defend the Latvians and Estonians, a miscalculation that could lead to conflict. The solution, he argued, would be to increase response capabilities in order to deter any possible Russian aggression.

"We have deterrent there and I think we're doing a good job with that," he said. "What we have do in the next several years is continue to increase that so the risk goes up for anybody who might consider operations in Eastern Europe."

Turchynov on the situation in the ATO area:

Considering the number of attacks, we are effectively at war

NSDC Secretary Oleksandr Turchynov has announced that an abrupt increase in the number of rebel attacks can in fact be considered as a military development, the NSDC press-service reported on Thursday.

"The enemy carried out 153 attacks on our positions in the past 24 hours," Turchynov stated.

He also added that such intensification of rebel activities claimed the lives of two Ukrainian military, and ten others were wounded.

Turchynov called this day a "black record" since the Minsk agreement had been signed.

"Actually, such intensity of hostilities corresponds to active military developments," he stressed.

Militants have intensified their activity near Artemivsk. They have moved military hardware to their forward positions along front lines, the head of the  Information Resistance Group, Dmytro Tymchuk, reports.

According to him, rebels made attempts to move closer to the neutral strip near Artemivsk.

"Units of Russian and terrorist forces continue to intensify their activity on the right flank of the Svitlodarsk foothold," his comment on last day's events reads.

The enemy continues to regroup and reposition its personnel and combat materiel.

"Gunmen finished  forming two joint artillery groups comprised of 22 units of 122- and 152-mm barrel artillery, 8 2S1 Gvozdika and 2S3 Akatsia SP artillery systems, and 8 Grad MLRSs. One artillery group was moved to positions to the south of Komsomolsk, the other one is being deployed to the area of  Krasnopillya-Kamyanka," a statement reads.

According to him, a joint mortar element, namely 12 82- and 120-mm mortars, was relocated from Donetsk in the southern direction.

Tymchuk also reported that two tactical forces, consisting of 60 and 100 people respectively, had been redeployed to the settlement of Sakhanka. The group also included 6 units of equipment, mainly APCs and multi-purpose light-armoured towing vehicles.

An armoured unit comprised of tanks and a multi-purpose light-armoured towing vehicle was moved  to Vesela Gora from the side of Lugansk. In total, the unit included 10 pieces of equipment.

According to him, a young 1982-born woman and a 1936-born man sustained shrapnel wounds in Dzerzhinsk.

A 1954-born woman and two men born in the year 1960 and 1928 respectively were wounded as a result of shell strikes on Avdiivka. Moreover, a number of houses were ruined, and electricity cables got damaged because of shelling. The town is cut off of the electricity.

Outlawed units of gunmen significantly increased the number of attacks on army positions firing almost all types of weapons in the period from 6PM yesterday till midnight, the ATO press-centre reports.

In the Artemivsk direction, insurgents fired mortars, 152-mm artillery, and grenade launchers on our troops near the village of Kirove.

In total, the past 24 hours set a new record in the number of rebel attacks in recent weeks, as Russian and terrorist forces breached the ceasefire 152 times on August 12. Most violations occurred in the Donetsk direction.

21 thousand people forced to move from the Crimea to Ukraine

As of August 1, 2015, 20844 displaced people, who were forced to leave the temporary occupied territory of the Crimea and the city of Sevastopol, are living in Ukraine.

Such monitoring results were released by the Representative Office of the President of Ukraine in the Autonomous Republic of the Crimea.

The Russian Federation has disregarded sanctions of the UN Security Council, as it decided to receive an Iranian general, Qassim Suleimani.

“We intend to work with the Security Council” to ensure that there is “a full, thorough, adequately run investigation, as well as sufficient follow-up,” Mr. Toner said.

A Security Council resolution adopted in 2007 calls for a travel ban on General Suleimani and other Iranian officials because of their links to Iran’s nuclear or ballistic missile programs.

General Suleimani’s travel raises questions about Russia’s intentions. The Obama administration has repeatedly asserted that Russia was helpful in negotiating the nuclear accord. Last month, President Obama called President Vladimir V. Putin to thank him for Russia’s “important role in achieving this milestone,” the administration said in a July statement.

The purpose of General Suleimani’s trip to Moscow, which he took in late July, according to a report by Fox News, is not clear. While there has been some speculation that he might have discussed potential arms sales by Russia, it seems likely that Syria was on the agenda.