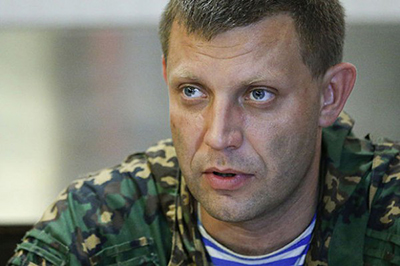 PRD rebel leader asserts the Minsk agreement has been disrupted

The PRD rebel leader, Oleksandr Zakharchenko, says that the Minsk agreement has been disrupted.

According to a video, released on August 16, he made his statement public when delivering a report in Donetsk.

"It is not worth to relax. The situation at the front clearly shows that the enemy (ATO forces) is willing to assume the offensive. We confront about 65 thousand personnel organised in 82 task forces. ... We cannot say there are expectations that everything may end with peace. The Minsk negotiations have actually been disrupted," Zakharchenko said.

However, the rebel on-line resource "Dan" quoted one of the PRD leaders, Denis Pushilin, as saying that the situation in Donbas had dramatically deteriorated because of attacks conducted by the Armed forces of Ukraine.

Furthermore, this rebel leader called on the leaders of the Norman format to intervene in the situation; otherwise the situation may end up with full-fledged military operations".

It should also be recalled that, according to reports of the ATO Headquarters and some witnesses, rebels have significantly intensified attacks on army positions near Donetsk and often commit to action Grad MLRSs. They also fire on resident quarters. Sources reported about casualties among civilians.

2 people dead and 6 wounded in artillery attack on Sartana

Two civilians have been killed and six others injured, including a child and its mother both severely wounded, as a result of terrorists' attacks on the Mariupol suburbs. As of 3AM, 52 damaged houses have been detected, 5 of which were hit directly, 0629.ua reports with a reference to the press service of the MIA department in the Donetsk region.

The head of the village council, Stepan Makhsma, previously reported that two people died as a result of shelling.

"In order to avoid rumours, I would like to inform you on casualties in killed, namely 2 civilians passed away, and six others sustained wounds, including a mother and a child seriously wounded. As of 3AM, 52 damaged houses have been detected, 5 of which were hit directly. We do not stop checking other buildings," he said.

General Staff: Rebels breached the ceasefire 148 times in the past 24 hours

A stronghold of ATO forces in the village of Troitske was assaulted with Grad MLRSs, mortars, grenade launchers and machine-guns for an hour from 7.50PM.

Mercenaries shelled Opytne 5 times in the period between 9.25PM and midnight with Grad volley fire systems. Ukrainian positions in Avdiyivka were bombarded at 10PM with 152-mm artillery and mortars. Moreover, this residential area was shelled two times with Grad MLRSs.

Furthermore, ATO strongholds in Pisky, Krasnogorivka, Berezove, and Verkhnyotoretske came under artillery attack in the period between 1PM and midnight.

Outlawed units of gunmen fired 122-mm artillery and mortars on Novogrygorivka near Mariupol at 9.40PM, and committed to action 152-mm artillery around 10PM in Granitne and Sartana.

The intensity of rebel fire slightly decreased on August 17.

According to him, rebels carried out attacks on Stanytsia Luganska with heavy machine guns, grenade machine guns, and anti-tank weapons.

A pipe line of average pressure was damaged at the intersection of Shevchenko and Moscow Streets in Stanyzia Luganska, leaving 1569 people without gas.

Militants bombard towns and villages. A man was killed

Rebels fired on Krasnogorivka at night. One civilian was killed, the press-service of the Donetsk police department has reported.

"An artillery attack on the town was conducted at around 1AM. A 1956-born man died of shrapnel wounds," a statement reads.

"EU has to be present in Minsk instead of Berlin with Paris;

this is the essence of Europe,"

A former Polish Foreign Minister, Radoslaw Sikorski, believes according to what he wrote in his article for Financial Times.

“On Ukraine, the EU is not even at the negotiating table. Instead, Germany and France — neither of whom shares a border with Ukraine — have taken it upon themselves to manage Russian aggression, with only partial success,” he asserted.

The reasons are clear. The financial crisis has undermined the EU’s clout and shown that member states are the ultimate paymasters and therefore ultimate decision makers. However, what was unavoidable in the resolution of the Eurozone crisis makes no sense in foreign policy. Russia is using the divisions inside Europe to create disunity, making a special effort to engage states that have little stake, individually, in the EU’s influence spreading east.

“As the Minsk ceasefire agreement stalls and fighting continues in eastern Ukraine, we are back to where we started a decade ago. The leaders of Russia, China and the US will listen to the leaders of the largest EU states, but are not at all inclined to act on what they hear. And if they want to call “Europe” it is still not clear which number they should ring.

Europe remains unable to influence events or bend history to its interests to a degree that reflects its status as the largest economy. If foreign policy is about helping to manage the free world, we need to go back to the rules created in the Lisbon treaty.

Case by case, member states should calculate whether a given issue is better resolved by them alone, or by the EU as a whole. And if they decide upon the latter, then they had better get behind European policy no matter what the domestic pressures. Germany, in particular, should be pleased by this principle. The Greek crisis has proved that if you take centre stage, you also get most of the blame. If Ukraine goes wrong, Germany will be blamed for that, too.

While the US as the world’s sole military hyper power cannot lead from behind, Europe’s nation states should do exactly that, and lead behind their jointly chosen leaders. We should go back to basics and empower our president and our high representative to do their jobs. Only then will we be able to evaluate their accomplishments,” the former foreign minister stressed.

It will be recalled that Radoslaw Sikorski said earlier that the Norman format does not suit Ukraine.

No water in PRL as a result of rebel mortar attacks

Having mortared Stanytsia Luganska, rebels left temporary occupied territories of the Lugansk region with no water, according to a statement of the press-centre of the Lugansk Regional State Administration released on Monday.

Separatists left with no water supply the majority of towns situated in the territory of the so-called PRL, namely Pervomaysk, Krasny Luch, Stakhanov, Antratsyt, Alchevsk, Bryanka and others.

"It's the third day of the summer heat wave in the Lugansk region. Having cut off water supply, terrorists condemn the population in occupied territories to the epidemic. they continue to torment the population by ignoring the agreement," the head of the Lugansk Regional MCA, Georgiy Tuka, said.

According to him, repairmen have gone to the location and are trying to repair the damage.

2 Ukrainian military died, and 7 others were wounded in the area of the anti-terrorist operation in the past 24 hours, a spokesman for the Presidential Administration on ATO issues, Andriy Lysenko, reported at a briefing on Wednesday.

According to him, the conflict in the east of Ukraine is escalating.

4 rebel drones were spotted over the ATO area on Sunday. Moreover, our state border guards reported about one Russian UAV and two helicopters flying along the boundary separating the Crimea and the Kherson region.