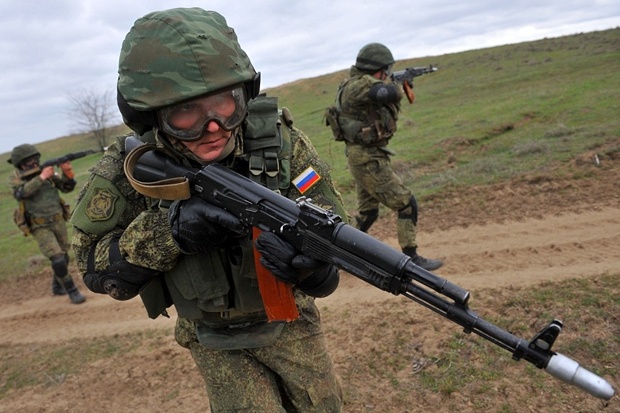 Recent open source reports and unverified images of Russian equipment in Syria indicate that the Kremlin may slowly be ramping up its presence in the war-torn country in support of the beleaguered regime of Syrian President Bashir al-Assad.

On Tuesday a Twitter account associated with the Syrian al-Qaeda spin-off group Jabhat Al-Nusra tweeted four images of what appears to be multiple Russian attack aircraft, including possible a SU-34 fighter jet and a Russian drone. Though the images are unverifiable, the account stated that the aircraft were seen over Idlib province—an area that has seen heavy fighting and steady advances by Syrian opposition fighters.

While the tweeted images have no landmarks on the ground as reference points, the Iranian state-sponsored FARS news agency released a report that Syrian aircraft bombed opposition forces in Idlib, including al-Nusra fighters on Wednesday.

The possible sighting of Russian aircraft in Syrian skies comes just two days after the Jerusalem-based newspaper YNET released a report indicating that Russian pilots and aircraft would be arriving in Syria in “the coming days” with the purported mission of flying airstrikes against the Islamic State and opposition forces that are threatening the Assad regime. While Russian fighter aircraft would be a new development, Russian drones have frequently been seen in Syrian skies in the now four year-old war.

The presence of Russian jets in the skies above Syria, where United States and coalition forces have been waging an air campaign since August of last year, could make managing the airspace an even more daunting task than it is already.

Ukraine's president has laid the blame for the murder of three policemen during a right wing demonstration on Monday firmly at the doors of the Kremlin, accusing Russia of extending its "campaign of destabilisation".

Three people died after grenades were thrown during clashes between nationalists and police outside Ukraine's parliament.

It followed a vote to give more powers to the regions, including separatist regions in the east.

In an exclusive and wide-ranging interview, he insisted that his reform programme to bring his country closer to European Union norms and requirements was on track, notably tackling corruption and the planned lifting of immunity for politicians - including himself.

He said that Russia had become "unpredictable" but he did not feel vulnerable, even though "this is one of the most difficult presidencies in the whole world".

His claim that Russia may have been behind the grenade attack on the police will gain credence among conspiracy theorists and some military theorists. Moscow has pioneered what is now known as "hybrid warfare" – the use of covert operators to foment instability.

Ukraine's president said he was proud of his country's ability to hold back the Russians and rebels given that a year ago he was told that "half your army is corrupt and the other 50% are Russian agents" by NATO and other western supporters who have now begun training his forces.

His hopes are most pinned on a ceasefire agreement that was signed many months ago but has only seen respect in the last six days, with no serious casualties reported from the front line.

"The only reason that the Russians came to Minsk and are prepared to negotiate at all was as a result of economic sanctions imposed by the outside world," he said, insisting that Ukraine did not need troops but it would continue to need the support of the international community.

Gunmen have fired heavy armaments for the first time in recent days, a spokesman for the Presidential Administration on ATO issues, Oleksandr Motuzyanyk, reported at a briefing on Thursday.

According to him, terrorists assaulted Ukrainian positions with 120-mm mortar near the village of Novotoshkivka close to the Bakhmutka highway.

Two rebel attacks were recorded near the Donetsk airport to the south of Avdiivka and near Spartak. Gunmen fired small arms and grenade launchers.

The enemy carried out 4 attacks on Ukrainian positions near Krasnogorivka and Maryinka in the period between 6 and 10PM with small arms.

“Unfortunately, all military threats and challenges are related to Russia. And all of them are of lasting nature. Conscious or subconscious rejection of Ukraine’s independence is so deeply rooted in the mentality of Russian political elite that it will not disappear in historical perspective,” the Head of State emphasized.

“False post-Soviet military doctrine based on the anticipation of an attack from the West hasn’t been reformatted in 24 years,” the President said adding that in times of Yanukovych the liquidation commission of Russian agents was working in the Ukrainian army and Ukrainian special forces to eliminate the last cells of combat capability.

The Head of State emphasized that the army has been recreated in a year: “We’ve created a new and modern army”.

[…] According to the President, both Ukraine and NATO are not ready to discuss membership yet. Still, there is a decision of the Bucharest Summit of 2008, which clearly states that “the doors are open”.

“I insist that the final version must provide for the achievement of not only criteria, but also full NATO membership,” Petro Poroshenko said.

Casualties in the past 24 hours: 2 soldiers died,

and 6 others were wounded in the ATO area

2 servicemen were killed, and 6 others wounded in the area of the anti-terrorist operation in the past 24 hours, a spokesman for the Presidential Administration on ATO issues, Oleksandr Motuzyanyk, reported at a briefing on Thursday.

According to him, the most troublesome situation was in the Lugansk direction.

Motuzyanyk reminded that a Ukrainian mobile combat team conducting countersmuggling activities had been ambushed in an area between Schastya and Slovyanoserbsk yesterday.