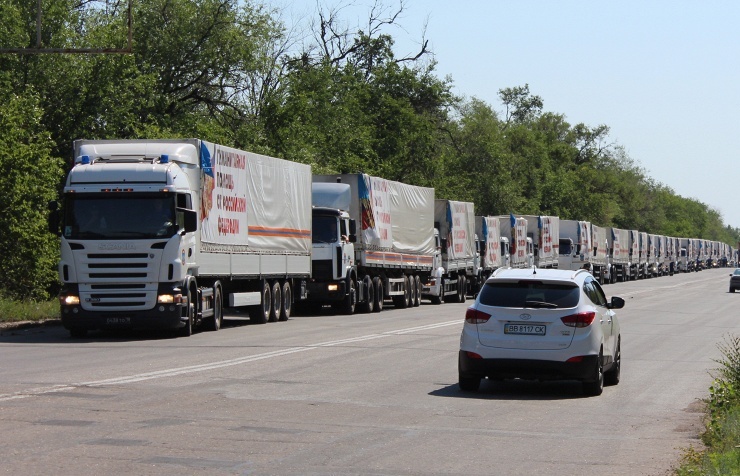 The convoy consists of more than 100 trucks that will deliver over 1,200 tons of humanitarian aid, including foodstuffs, medications and textbooks for the students of Donetsk and Luhansk regions.

The convoy consists of more than 100 trucks that will deliver over 1,200 tons of humanitarian aid, including foodstuffs, medications and textbooks for the students of Donbas.

On the way to the war-torn region, the convoy will be divided into two equal parts. One will head to the Donetsk region, and the other one to the Luhansk region after undergoing all the procedures at the checkpoints.

The RF is currently planning to dispatch the next "humanitarian convoys” for Donbass on September 24 and 30.

According to RIA Novosti, 37 convoys of the Russian Emergency Ministry with 45 tons of "humanitarian aid” have entered Ukraine since August, 2014.

As reported earlier, Ukraine speaks against the arrival of Russian "humanitarian columns", which illegally cross the border in areas Ukraine is not able to monitor.

No violations were reported along the demarcation line in the period between midnight and 7PM, September 16; however, rebels carried out three attacks last night, the ATO press-centre reports.

In particular, in the Artemivsk direction, Ukrainian troops stationed to the north of Sanzharivka were assaulted with small arms at 8 and 11PM.

A stronghold of ATO forces near Kryakivka was also attacked with small arms at 11.35PM.

The Ukrainian army suffered no losses yesterday according to reports.

Rebel leaders claim they will allow Ukraine to monitor its borders,

only when it becomes a federation

The ringleaders of the occupied territories of the Donetsk region believe that the issue of control over the Ukraine-Russia border has to be settled after all the others, Denis Pushilin, a PRD rebel representative participating in the Minsk negotiations, said as reported by the Lugansk rebel web site "Luganskinfocentre".

"Before we grant access to the border, we want to see a completely different Ukraine", he stressed.

"After the Minsk agreement has been fully implemented, we will see Ukraine with a new government; it will be a federal state, which takes into consideration concerns of all citizens. [...] After a constitutional reform - agreed with Donetsk and Lugansk - has been introduced. We are talking about the electoral law, special status, and a number of other things Ukraine has not fulfilled yet. And it won't in the near future," Pushylin said.

"The issue of the border control is the last one on the list, and we'll discuss it once everything else has been implemented. There is nothing to be afraid of; neither should one believe it is our weak point," he stressed.

As reported earlier, Ukraine insists elections to be held in the occupied territories only after Russian troops have been withdrawn from Donbass and Ukraine has re-established control over its borders.

Defense Ministry of Latvia: The probability of RF's military invasion is low

The probability of Russia's direct military invasion of Latvia is low, but, considering the geopolitical situation, one may encounter elements of a hybrid war, the Defence Ministry's press officer, Dace Kundrate, told lsm.lv.

According to her, the government has assessed the probability of a military threat to Latvia, and now it can be rated as low.

Nevertheless, as reported by the Defence Ministry, the violation of international norms and use of military forces for political purposes implemented by Russia in Ukraine, gives a feeling of uncertainty and unpredictability to all Russia's neighbours and European security in total.

The director of the film Winter in Fire, Yevgen Aphineyevsky, came onto the stage in a t-shirt with Sentsov's photograph and the inscription #FREESENTSOV on it, a UKRINFORM correspondent reports.

In addition, activists proposed to sign a petition on Sentsov's freeing and distributed leaflets.

No losses were reported in the area of the anti-terrorist operation in the past 24 hours, a spokesman for the Presidential Administration on ATO issues, Oleksandr Motuzianyk, reported at a briefing on Thursday.