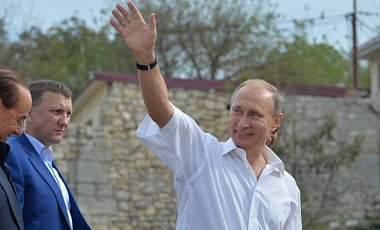 for Syria, Moldova and Latvia

Russia's actions in Syria may lead to the military occupation of country's Western coast, Amir Taheri wrote on pages of the New York Post.

For years, Russia has been helping Syrian despot Bashar al-Assad cling to a diminishing power structure in a shrinking territorial base without trying to impose an overall strategy. Now, however, there are signs that Russia isn’t content to just support Assad. It wants to control Syria.

Putin has long wanted to seize a Mediterranean port, and the current conflict in Syria presents the perfect opportunity.

Russia’s military intervenes directly and indirectly, always with help from a segment of the local population concerned. Russia starts by casting itself as protector of an ethnic, linguistic or religious minority that demands its military intervention against a central power vilified with labels such as “fascist” and “terrorist.”

Tested in Georgia with success, the Putin treatment was next applied to Ukraine, where a pro-West regime was talking of joining the European Union and even NATO. Russia intervened in Crimea to “save” its Russian-speaking majority from oppression.

Facing no opposition, Putin simply annexed Crimea before giving the Donetsk area of eastern Ukraine the same treatment, this time with the help of “Russian volunteers” coming to help fellow Russian-speakers.

In Ossetia, Putin gained control of key passages to Chechnya and upper Caucasus.

In Abkhazia, he extended Russian presence on the Black Sea.

In Crimea, he saved the Russian Navy’s largest base.

In Donetsk he obtained a political pistol aimed at the temple of the government in Kiev.

Four rebel attacks in the past 24 hours; insurgents fire mortars

Illegal paramilitaries have mainly observed the armistice in the ATO area; however, they have occasionally resorted to weapons, a report of the ATO press-centre reads.

In the Artemivsk direction, a Ukrainian stronghold near the village of Luganske was assaulted with small arms from rebel positions located in Nyzhnye Losove at 6.30PM.

Also, the enemy attacked Ukrainian positions in Mayorske with small arms at 8.10PM.

In the Lugansk region, gunmen fired 82-mm mortars on our troops in Sokolniki from their positions in Slovyanoserbsk at 10PM.

In general, outlawed units of gunmen breached the ceasefire 4 times in the past 24 hours.

The situation in the area of the anti-terrorist operation became more complicated over the weekend, September 19 and 20, the founder of the Information Resistance Group, Dmytro Tymchuk, posted on Facebook on the morning of September 21.

Militants carried out occasional attacks on ATO positions with small arms, heavy machine-guns, 82-mm mortars, and AHS-17 grenade launchers. Snipers intensified their activity in a number of areas, too.

"Yet another troop train with ammunition and equipment has come to the Illovaysk railroad station from the RF," Tymchuk added.

Blockade of Crimea, with almost 200 trucks still waiting; 18 others returned

There are 83 trucks with goods parked in Kalanchuk, 114 - in Chaplynka, and 18 trucks have returned home so far as a result of a blockade organised at the entrance to the Crimea, a journalist, Osman Pashayev, wrote on Instagram on the morning of September 21.

As reported earlier, Crimean Tatars launched a blockade of goods going to the Crimea from the Ukrainian side on September 20. Their actions were also supported by Right sector activists.

No deaths were reported in the area of the anti-terrorist operation in the past 24 hours, but one soldier sustained wounds, a spokesman for the Presidential Administration on ATO issues, Andriy Lysenko, reported at a briefing on Wednesday.