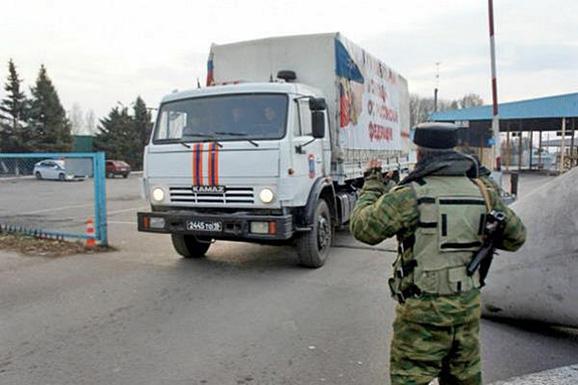 Russia’s emergencies ministry will send yet another, the 39th, humanitarian convoy to Donbass, the ministry’s press service told TASS on Thursday.

"Another humanitarian convoy that was formed on September 22 will set off for Donbass from the Don rescue centre of the Russian emergencies ministry early on Thursday," the press service said. More than 100 trucks will deliver more than 1,200 tonnes of humanitarian cargoes to the Donetsk and Lugansk regions. The humanitarian cargoes include food products, such as canned foods, cereals, macaroni, tea and butter, and medicines for health institutions in Donbass.

The convoy will break in two before the border. One will go to the Donetsk region, and the other - to Lugansk region, after all necessary procedures at border crossing points.

Since August 2014, the Russian emergencies ministry has delivered more than 46,000 tonnes of humanitarian cargoes to Donbass.

As reported earlier, Ukraine does not control a part of its frontier with Russia in the east of the country.

Rebels have breached the ceasefire that had been observed during the day, on the night of 23 to 24 September, the ATO press-centre posted on Facebook.

A Ukrainian stronghold located in the village of Krymske, Lugansk region, was assaulted three times with small arms from rebel positions near Slovyanoserbsk.

In the Artemivsk direction, a Ukrainian mobile combat team was fired upon with small arms near the village of Zolote at 6PM.

In total, insurgents breached the ceasefire 4 times in the past 24 hours.

Today, 24 September, army positions in the village of Zaytsevo were attacked with heavy machine-guns at 1AM.

Moreover, rebels stationed at Staromykhaylivtsi shelled an ATO stronghold in Krasnogorivtsi near Donetsk at 2AM with 122-mm artillery.

IRG: Rebels "Leave the Service" Massively; They Are Forced to Hand over Passports

Donbas rebels suffer from low morale; they have begun to defect and wish to "resign", the Information Resistance Group reports.

In particular, "three mercenaries of the Oplot Brigade stationed in Mospyne have defected within the past few days. A large number of militants want to "leave the service" now, the IRG reports.

According to their information, the personnel of the Oplot Brigade were forced to hand over their IDs in order to prevent them from defecting".

He also stressed that there was a threat of reescalation of the conflict despite the apparent lull in fighting.

"Firstly, all missions continue to report about ongoing military drills, some of which occur very close to the demarcation line. It obviously undermines the armistice," he said.

1 service member killed and 2 others wounded in the ATO area in the past 24 hours, a spokesman for the Presidential Administration on ATO issues, Andriy Lysenko, reported at a briefing on Wednesday.