Inscriptions in the Sophia Cathedral in Kiev, XI-XII centuries. indicate that the language of Ukrainians was different from other Slavic ones. It had many features that have remained so far. 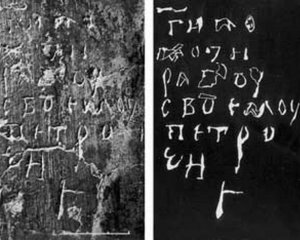 "A lot of graffiti with the ending in the Ukrainian language ending with 's', 's'." For example, "Lord help your servant Lazorev". This is the third quarter of the 12th century. The formula "Lord help" is canonical. , it was unchanging, but the name varied. It was not always written as the Church Slavonic language demanded, but as used to say. So it was written not to Daniel, but to Daniel, not to Peter, but to Peter, to Dmitri, "- he explains.

In the XI century. the names in the nominative case are written with the ending "about", as in modern Ukrainian - Peter, Mark, not Mark.

"Thanks to graffiti, we know the names that our ancestors carried in the Middle Ages: Stefan, Trochim, Zhiznobud, Mikhail Domosid, Mikhalko Nezhenovich, Ivan Slipko, Oleksa Khavziyko, Ignatii Maestat, Illya Kopylovych, Tudor Tuubytor, Ivan Tupychydor, Ivan we know that surnames or nicknames appeared in the XI century and not in the XIV-XV centuries, as it was thought before. It is interesting that in those distant years people followed the rules of writing. in which he used the exclamation mark "Foko" and asked to help "at sea", - told orniyenko.

Separate graffiti indicates that authors from Polesie, Chernihiv-Seversky Principality, where "I" at the end of the words utter firmly. This was reflected in the inscription "The goat daddy stole the mass of your ass and your cock amen".

"In some regions of Polesie they still say" mass ". The dialectism" assilon your coconut amen "is preserved there as well. In the church-Slavic" coconut "it is a cock. In folk dialects Polesie" coconut "is chicken paws or human The well-known saying is "sit on your heels", that is, sit down, but you will also see "throw off your hens." The word "strongman" is the same as a bird caught by birds. Therefore, the author from the Chernihiv-Seversky Principality wished that Kozma's detractor " legs are confused, "says the researcher.

Very interesting verse text of the first half of the XII century.

"Here we see the typical Ukrainian word forms" woe to you "," Andronic "," knows "," nobody ". We see clearly elements of the spoken language that penetrate into the language of writing, and this is very important. Or another interesting inscription: "Kupriyani Ok Yisi ate Sui Rasmaglitz". This text asking for help to read was sent to colleagues from Belarus, Lithuania, Russia. If the first part of "Kupriyani Ok Ok" was clear to them, then the second, especially the word "Rasmaglitz" - absolutely no If we open the dictionary of the Ukrainian language, we will see there the word "thirst" (strong desire not to drink, thirst) and its derivatives "suntan", "to fry". The address "Kupriyan is OK ate sui rosmaglitsa mi", which in modern language sounds like: "Kupriyan, which is beautiful, how much more in vain do I ignite", was left on the wall of Sofia by an unknown girl in the XII century. ", - said Kornienko.

Historian Vyacheslav Kornienko says that in the times of Kievan Rus there was already an Old Ukrainian language. This is evidenced by the graffiti on the walls of the Sophia Cathedral and the vocabulary of ancient language monuments. They have many examples of purely Ukrainian word construction.