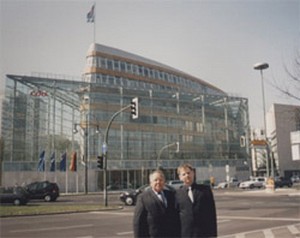 By the invitaton of President of European Senior Citizens Union (ESCU) Dr. Bernhard Worms the Chairman of the Council of Ukrainian Association of Retired Persons Volodymyr Dzyobak has recently visited the head-office of this inernational organization in Berlin.

That was a return visit (after Dr.B. Worms has visited UARP central office in Kyiv in autumn 2002.

The Head of the Council of Ukrainian Association of Retired Persons became familiar with work of ESCU, he had conversation with its employees, studied the experience in struggle for the rights of senior citizens in countries of Western Europe. Bernhard Worms, who also leads German Senior Citizens Union, shared experience and work plans on protecting rights of senior citizens in FRG, he told ukrainian guest how was collaboration between national senior unions from European Union and other international organizations carried out. He also confirmed his decision, which he gave when staying in Kyiv, about accepting Ukrainian Association of Retired Persons to European Senior Citizens Union.

During the meetings in Berlin the leaders of national public senior citizens organizations discussed prospects of further co-operation, exchanged ideas about urgent issues concerning struggle for improvement of life quality of senior citizens, realization of main principles of citizens equality, observance of their constitutional rights without any attempts to limit them due to the age.

Volodymyr Dzyobak thanked Dr.B Worms and his colleagues for friendly reception and for opportunity to learn cultural and historical sightseeing of German capital.