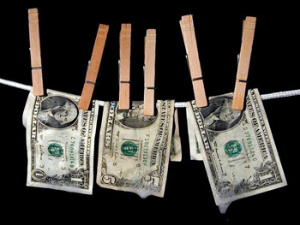 Paper money first appeared in the East; they came into circulation in the European countries only in the 17th century. It was much more convenient to pay with banknotes, for one did not have to carry a heavy purse with metal coins. But no one could realize at that time how dangerous they might be. How could they find out that the paper money is a germs breeder.

A huge number of microorganisms “live” on our palms, approximately 800 million. And this list is constantly updated and is changing: in the street, in public transport and so on. Everything we touch can be potentially dangerous with  money on the top of the list.

On the average, a banknote changes its owner up to five times within a day. Its handed from people to people, kept in tills, dropped on dirty floors. As result a layer of dirt builds up on  banknotes, which become an ideal environment for the living and breeding of various microorganisms (by the way, the higher denomination of a banknote the cleaner it is, as it is used by a smaller number of owners).

We "pick up" viruses, fungal spores, various bacteria even without realizing it. The most common and innocent "money microorganism" is a putrid germ proteus, which can cause poisoning. Causative agents of dysentery, typhoid, salmonella, hepatitis, pathogenic staphylococci and streptococci as well as helminth eggs can easily be found on most banknotes (especially during the warm month). On many of them, fungal spores such as candida settle causing not only skin diseases and mucous membrane diseases, but also internal diseases.

The most annoying thing is that many diseases, caused by fungi, have not been sufficiently explored yet resulting in doctors’ inability to institute effective therapy.

Scientists believe that it is more than enough for getting contaminated just to hold a banknote in your hands for a moment and then to start eating with unwashed hands. Sometimes it could be enough just to touch the face and lips with your hand. People with weakened immune systems can also be infected through the damaged skin and mucous membranes.

"Money microorganisms" are a great danger for people with weakened immunity, for elderly and children, as well as for those in constant contact with money: cashiers, shop assistants, workers at exchange offices, waiters, accountants.

How to protect yourself from infection? Doctors believe that the most important thing is to adhere to rules of personal hygiene. If you held money, make sure you thoroughly wash your hands with soap and water. Being easily transferred on banknotes, germs can penetrate into the body through small skin lesions, therefore we should pay attention to the condition of our hands., for example, It is recommended for cashiers to work in gloves.

In Ukraine, the disinfection of money is not performed yet, although this is a completely normal procedure in some countries.  Among effective methods are treatments of banknotes with ozone, ultraviolet radiation or heating them to a certain temperature (Japan decontaminate banknotes by heating them in the ATMs to 200 °С. This allows you to destroy most microorganisms without damaging paper). American scientists proposed to impregnate the paper used for printing money with special antiseptic liquids, which can kill bacteria on the surface of banknotes. And the government of India decided to adopt experience of countries, such as Australia and New Zealand, in which plastic money have successfully replaced conventional paper bills.

Some researchers have proposed to use credit and debit cards as a safer alternative to paper money.

Additionally to the topic

Experts have researched that the dirtiest money in the world is the Indian rupee and the U.S. dollar. According to them, a high level of contamination of dollars can be explained by the geography of consumption; When travelling around the planet, these notes collect germs from the most remote corners of the world. A sensational announcement was done by American researchers, who said that they had found cocaine on the most of American bills as drugdealers and white powder lovers use notes for particular purposes; that is how they spread over many different countries being covered in cocaine.

Among the European countries, Denmark and Sweden have the most dirty money. By printing banknotes in Denmark, a special coating is applied that provides hygienic protection against microorganisms.

Special Correspondent of the UARP.