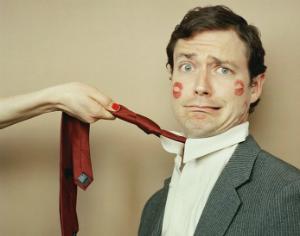 A wry look into the mind of the male monogamist

Judging from the news, women might be forgiven for wondering if every married man is cheating on his wifethese days. Or at least every politician, movie star, CEO or athlete of any stature whatsoever. Whether it's Anthony Weiner, Eliot Spitzer, Ashton Kutcher, Tiger Woods, Arnold Schwarzenegger, Mr. Sandra Bullock or that peripatetic governor from South Carolina, the spectacle of high-profile infidelity suggests that American husbands have lost their moral compass and cravenly adopted the motto: "What happens in Vegas stays in Vegas. In fact, it doesn't even have to happen in Vegas to stay in Vegas. As far as I'm concerned, nothing that happened anywhere ever really happened. Even if I get caught red-handed."

Everyone knows why men cheat. Well, everyone thinks they know. The theory runs like this: Men — not all of them, but quite a few — are pigs. They disingenuously identify themselves as hunters, as opposed to gatherers or certified public accountants or weenies, and thus deem themselves biologically incapable of remaining monogamous.

Once they have manufactured this self-serving, pseudo-scientific rationalization, additional justifications for infidelity are easy to devise. Their wives no longer love them. The sex fell off after the kids were born. The thrill is gone. When they are brutally honest, they might come clean and admit that they have met somebody younger. Or somebody better-looking. Or somebody richer. Or somebody younger, better-looking and richer. With whom the sex is awesome. Which brings us back to the original point, that a lot of men are pigs.

But most are not.

Statistical evidence suggests that cheating is nowhere near as rampant among ordinary men as it would appear to be among pols and jocks and thespians and high-octane suits and other libidinous creatures. According to the General Social Survey conducted by the National Opinion Research Center at the University of Chicago, no more than 22 percent of men have ever engaged in marital infidelity, and only one man in 20 is unfaithful to his wife on an annual basis.

So if a guy calls his wife to say he's working late, there's a 95 percent chance that he's chained to his desk, not stepping out with the nubile new hire in creative services. (Men are more likely to stray than women — or at least more likely to admit it — though the gender gap may be closing, the survey found: Nearly 15 percent of women say they have cheated.)

Our natural instinct is to believe that faithful men adore their wives, are blissfully happy in their relationships and would never dream of fooling around, because it would violate their personal moral code. You can build entire societies around mensches like this. These men are willing to work to make a marriage succeed. To them, marriage is not a trifle, not a lark. Following this logic, men who don't cheat are first-class human beings.

But are they? All of them? Really?

Over the years, I've met a few guys who cheat on their wives and an awful lot who don't. Or let's just say I think they don't. But is it possible that these husbands refrain from cheating not so much because they love their wives, and not even because they view cheating as immoral, but for other, less laudable reasons? Consider, if only for the sake of argument, the following explanations for why some men are faithful to their wives:

Many men are incredibly lazy

Men like to plop down on the couch and watch sports and drink beer. Romance, by contrast, is labor-intensive; you have to shower, shave, slap on some deodorant, put on something other than sweatpants, buy flowers, go to the movies, read a book every once in a while, think of compliments, engage in conversation. Cheating on your wife involves travel, dinner reservations, booking hotel rooms. Once a man has been married a few decades, the energy he would need to expend on an extramarital affair could be a life-threatening shock to his nervous system. It would be like asking the Sahara to suddenly erupt in foliage. That's why so many older men wouldn't even think of cheating on their wives. It's too exhausting.

Some men are startlingly ugly

Women swear up and down that looks are not nearly as important to them as they are to men, that a woman will not hesitate to marry an unattractive man if he has other compensatory qualities, such as a sense of humor or a highly developed intellect or a villa in Tuscany. I only believe the part about the villa in Tuscany. I personally cannot recall the last time I saw an attractive woman with a hideous man, and I keep my eyes peeled for this sort of thing. You might see a 10 with an 8, or an 8 with a 5, but you never see a 9 with a 2. And that's the reason ugly men do not cheat on their wives.

An ugly man is so happy that he found one woman willing to gaze at his baleful countenance for the next 40 years that there is no way he is going to risk everything by cheating on her.