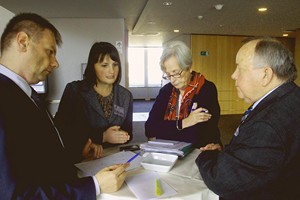 9 - 10 November UARP delegation led by Chairman of the Board Volodymyr Dziobak stayed in the Belgian capital Brussels. There were meetings and negotiations with President of the European Senior Citizens' Union Dr. Bernhard Worms, USCU Secretary General Ingeborg Uhlenbrock, USCU Vice President for Eastern Ulrich Winz. It was discussed a number of issues concerning the development of national associations of the elderly people, the observance of international agreements on human rights and freedoms.

10 November UARP delegation took part in the meeting of the Executive Committee of the European Senior Citizens' Union, during which, in particular, the floor was given to the Chairman of the UARP Board V. Dziobak. The text of the speech is available at this site.

Speech of the Chairman of the UARP Board Volodymyr Dzobak

at the meeting of the Executive Committee of

I am pleased to see familiar faces, to communicate with people who make our common cause, are working in the National Association of Retired Persons, serve to common interests, to the ideals of social equity and humanism, combined with a single goal: to improve the quality of older citizens life.

Last time I had to meet with you in the hospitable Vilnius, where I already informed colleagues about the main directions of work of Ukrainian Association of Retired Persons. So I will not list our existing programs, as a matter of fact, everyone can see the information about them by opening our website.

But I deem it duty to tell you about one part of UARP activities, which is important not only for Ukraine but also for the world. It is about the protection of the elderly people rights. I recall that in 2004 we together with lawyers, psychologists, and gerontologists have prepared a draft law on the prevention of discrimination of the elderly people in Ukraine. In 2005, this bill was introduced in Parliament by MPs who lobbied our interests there. However, unfortunately, there the matter dropped because the composition of the Parliament was changed, and now we had again to seek the promotion of this bill, to convince legislators and society in need of the Law against discrimination of elderly people.

We managed to get re-introduced a bill to the Parliament, and this summer it was included in the agenda, reviewed and ... failed! Yes, yes! Paradoxical fact is that not a single vote against it! One MP abstained. As it turned out, you can also fail the most important law in this way: many members simply did not vote - neither for nor against.

In general Ukraine is a country of paradoxes. Well, is it not a paradox that over twenty years of independence, under all presidents and governments, all our people lived and continue to live their own lives, and the authorities live their own lives? Our citizens have become accustomed so that all the authorities do not hear the voice of the public; they learned to live as if this government does not exist at all.

Talking about our association, then in 11 years of its activities we have not received any support from the government (although it should be noted that we was not faced interferences from it except for the last few months, when we felt a strong pressure).

Of course, paradoxes are and will be. But we, in activities of UARP, are following the principled position if criticize the government, then at the same time to make constructive suggestions. For example, we see that for these twenty years there were numerous talks and statements about pension reform, and in fact it has not started. What the government is trying to present to the society as pension reform, in fact can be called only the protocol of intentions. Significantly, when the Verkhovna Rada adopted a law dedicated to this important task, lawmakers decided not to call it the law on pension reform. It has quite a "streamline" title: "On measures concerning legislative guarantee of reform of the pension system." Obviously, they do understand that this document "fall short of" the real pension reform. We are sure that such approaches inherent to our politicians will not give the desired effect.

Government has repeatedly declared its intention to involve the public in working out the pension reform, but our numerous requests to hear us to consider our constructive proposals on this issue remained unanswered.

We're not going to complain to you on our government. The government is what it is. But we would like to see Europe not identified the Ukraine, its people with one or another political leader. It is fundamentally wrong approach! Today we have a fourth president. Then it will be a fifth and sixth, and forty-sixth. Presidents come and go, but Ukraine was, is and will be a country in a Center of the Europe.

Therefore we ask you to judge it not by the behavior of political leaders, but by the real achievements of the country and its people. A striking example of what we can do many things at a high level, can become Ukraine's preparation for Euro-2012. When it was decided to host the European Football Championship in Ukraine and Poland, there were many skeptical statements in the media, saying that Ukraine beyond the power of this task, then that would be necessary to transfer the championship from Ukraine to other countries. But you come and look at our stadiums, airports, roads and hotels. Michel Platini visited and he was satisfied with the preparations, and there is no doubt that everything will be good. 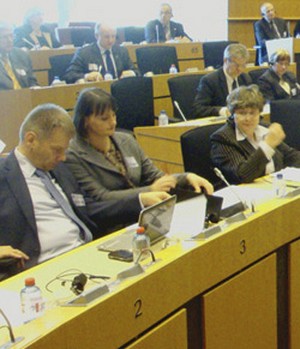 We anticipate that the leadership of the EU can put forward a counterargument: behold, supposedly, first make all economic, social, and especially democratic parameters of policies pursued by the authorities in your country, at the level of the European Union requirements, and then raise a question about Ukraine's integration into the EU.

It is a fair claim. However, not all and not always have to be planed basing on the perfect partners. As you know, there are no perfect people, perfect society; moreover the power is never perfect. What is here prevaricate, let’s speak frankly: is everything in the EU is so perfect? Are there no problems between the EU countries? So, why to some countries you feel tolerant but not to Ukraine?

Ukraine for a long time played an important role in development of Europe. It is, according to many historians, served as a shield between the West and the threats from the East. As you know, X - XI centuries Kievan Rus was the largest cultural and civilized state of the world. Not accidentally, for example, the daughter of Yaroslav the Wise, Anne became Queen of France and taught literacy Parisian officials. In Europe at that time there was no greater state than Kievan Rus. And our ancestors already knew a lot about integration. Kievan Rus created great union of nations, incomparable to anyone in the West. Its economic development has not only provided normal life conditions for the population, but also gave posibilities to supply many products for export. Considering the geographical location at the crossroads of trade routes between the Baltic and Black seas between Asia and medieval Europe, ancient Ukrainian territory was one of the important centers of international trade.

The struggle waged by Kievan Rus, was one of the links in constant struggles waged by Europe against the onslaught of Asia. Ukraine in this fight has the most dangerous place for defense against wild hordes. It has first taken the brunt of the nomads and for centuries was invincible shield against invaders. Occupying a huge territory from the Baltic Sea and the Arctic Ocean to the Black Sea and the Volga to the Carpathians, Kiev Russia played an important role in shaping the political history of Europe. Even after the collapse of Kievan Rus' Galicia-Volyn land served to Central and Western Europe as a shield that stopped for a long time withheld the Mongol invasion. After all, thanks to an alliance between Batu Khan and Ukrainian Prince Danylo Mongols didn’t carry out campaigns to the West.

We remember the history of the Mongol invasion, which undermined the power of Kievan Rus. But we should not forget that the further advancement the eastern hordes to the West did not happen just because of fighting on our lands they were exhausted and stopped. Ukraine stopped and Ottoman invaders, who are under the blows of the Ukrainian Cossacks retreated back and weakened in the battles with them, could not reach Western Europe.

Fast forward to later periods of history, and note that in distressful land of Ukraine during World War II 14 million people were killed, and our entire country because of Hitler's invasion was turned into ruins. It is no secret that even such anti-Soviet politician as Winston Churchill said that the brunt of that war took over the Soviet Union and the occupation of its European territory begin with Ukraine. Many considered as a paradox the fact that among the founders of the UN, along with the former USSR was Ukraine. So the world community paid tribute to our country because of the huge losses which have been incurred in the war against the Nazis. And now our citizens are trying to understand another paradox: how can we explain the fact that Ukraine, which is located in the center of Europe, occurred on the sidelines of European integration, whereas, for example, Turkey enjoys the full confidence of the West?

People of the older generation are not easy changing their faiths. However, we are pleased to note that the majority of the UARP members endorsing a course on European integration. Then we are making continuous efforts to ensure that it remains unchanged. It is important to end the situation in which Ukrainians seems that in the EU no one else is waiting for us. We are optimists by nature and, paradoxically, still continue to believe in the best. We hope the members of USCU will understand our position.

So I would like once again to express the wish that you have treated our people, Ukraine, regardless of who is in power. The closer will be contacts between us, the closer will be politically Ukraine to the EU, and the less space will be for authoritarian regimes, for lack of freedom and suppression of dissent manifestations.

In conclusion, I want to thank the management of the European Senior Citizens Union for giving me the opportunity to participate in this important forum and share ideas that concern us with colleagues.

Thanks for your attention!